Can't find?
Only for progress - not closable Only for info - closable
filters_show ▼
filters_hide ▲
Filters
All availability 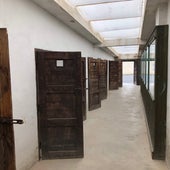 1 photo
Wrote about us